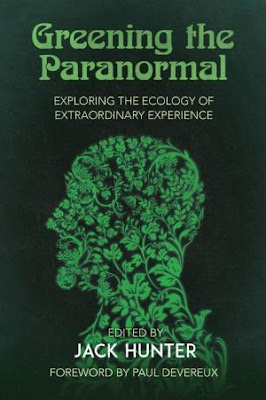 Greening The Paranormal: Exploring the Ecology of Extraordinary Experience
Edited by Jack Hunter
August Night Press; 2019
In his introduction to the essay collection Greening The Paranormal, editor Jack Hunter explains that the motivation behind the project wasn't merely that the subjects of what he calls anomalistics (that is, the paranormal) and ecology are both interesting subjects, or that the ways they intersect with one another are interesting.
Rather, those with an interest in the paranormal represent a large and perhaps untapped source of positive activism for addressing various ecological crises.

Belief in the paranormal is "remarkably common in the Western world," Hunter writes, noting a survey that suggests 75.9 % of the U.S. population holds "some form of paranormal belief", while only 53% are afraid of global warming or climate change.
"Based on these figures it would appear that there are more paranormal believers in the US than people worried about the damage we have inflicted on the global ecosystem," Hunter writes, before asking, "What if the paranormal demographic could also be tapped into for climate change mitigation?"*
So there's that, but there's also, the fact that "approaches emerging from the study of (and engagement with) the supernatural may ultimately help us reconnect with the natural, and in so doing develop innovative approaches to confronting the eco-crisis," and "for the essential task of contributing towards a much broader—necessary—change of perspective concerning our relationship to the living planet."
Perhaps the best example of this comes in a passage about animism he writes, and the granting of legal personhood status to certain ecosystems, like Whanganui River in New Zealand, the first river to be granted legal personhood. Whether or not we as individuals subscribe to animistic beliefs, it seems pretty clear that if we treated animals, plants and all elements of the natural world as if they had a degree of sentience, we would inevitably treat the world more kindly.
While his lengthy introduction is perhaps the most compelling chapter in the book, the collection that follows it is an interesting, if curious, one. It ranges so widely that it can be difficult to find throughlines, with "the paranormal" being such an awfully broad topic. I found myself wishing that Hunter's introductory essay, sizable though it is, was the entirety of the book. Or that Hunter, or perhaps some other author like him, would engage in a book-length argument aimed at convincing those three-fourths of Americans who believe in some aspect of the paranormal to start taking action regarding climate change.
Instead, that chapter is followed by sixteen essays, covering subjects as diverse as various Native American spiritual beliefs and worldviews, psychedelic experiences, the concept of soul birds and, most oddly to my eye, a bit of literary criticism focused on predators of humanity in Whitley Strieber's early writing and Communion.
Of the essays beyond Hunter's, the one I was most interested in was Susan Marsh's "Cryptozoology in a Changing World," as cryptozoology is the aspect of the paranormal/anomalistics which I am personally most interested in (and certainly the one I've devoted the most reading to).
It was during all of the international coverage of the Brazilian wildfires of 2019, the ones that choked Rio de Janeiro with smoke and turned the skies in Brazil that unsettling, apocalyptic shade that the thought occurred to me that there is a particularly compelling narrative regarding cryptozoology and species loss due to the climate crisis. That is, if we are losing species at such an alarming rate that we may actually be in the midst of the sixth mass extinction, what does that say about the safety of particularly large animals that are apparently so rare that they may not even exist at all?
Among the many intriguing cryptids, those animals thought to perhaps exist but not yet proven to do so that cryptozoologists spend their time chasing, is a giant ground sloth thought to perhaps still live somewhere in the Amazon jungle, and to have inspired indigenous people's stories of the giant monster Mapinguari. If there really is such an undiscovered animal in the Amazon, how would the wildfires there, in addition to the regular, steady rate of deforestation, affect it, or other South American cryptids, like giant anacondas, giant monkeys or De Loys' ape?

Or, to take perhaps the most famous cryptid for an example, if Bigfoot really is real—and I personally don't think it is—then what are the chances it survives the climate crisis? If there really were a small breeding population of  large apes living in North America, surely these extremely rare animals would be at great risk of going extinct from various extreme environmental pressures before they can be discovered by science. (What a terrible irony would be if scientists did find that there really was such an animal as Bigfoot, but that they went extinct in, say, 2008).
Marsh's essay takes a different approach to this particular intersection, though. Rather than focusing on how tiny populations of cryptids are at even greater danger than species robust enough to be known to definitively exist, she discusses how ever-increasing human populations and habitat erosion can lead to crytpids becoming more rare...or more frequently seen.
She cites examples of expeditions searching for the Almas and Orang Pendek—hairy hominids rumored to live in Russia and Sumatra, respectively—and how sightings of them have decreased in areas where they were once quite rich.
In contrast, however, the United States' answer to the yeti-like creatures, the aforementioned Bigfoot, have only increased as our populations have grown. "So, could Bigfoot, Sasquatch and their ilk be growing bolder as they encounter more and more humans in their natural habitats?"
Marsh notes that the world's other most famous cryptid, the Loch Ness Monster, has been seen more and more as development increased around its supposed habitat, not less and less.  She then cites two of cryptozoology's favorite examples, the okapi and the coelacanth, as animals who were only officially discovered by science once Western "civilization" started to encroach on previously wilder, less-explored regions.
For cryptozoologists, perhaps there is therefore a silver-lining to the gray clouds of smoke emanating from Western wildfires: Maybe the last of the Bigfoot won't die undiscovered as the planet warms and their habitat buns, but come stumbling out of the fire and into the spotlight of science?
Concern for animals that  may not actually even exist may seem like misplaced concern, given the urgency of the climate crisis and the mass extinction crisis, but then, concern is concern. A world that's wilder, cleaner and cooler, a world more likely to support Bigfoot, lake monsters and giant Brazilian ground sloths is a world much more likely to support all the animals that we know definitely do exist...including humanity.
*It is here perhaps worth recalling what Gary Gardner said about faith communities and how they are so well-positioned to effect major, positive changes when it comes to addressing the ecological crises in his book The Earth Cries Out, reviewed in the previous post. Hunter too spends some time talking about organized religion's posture toward environmentalism.
on July 21, 2021

Caleb
J. Caleb Mozzocco is a freelance writer who lives and works in Ohio. Creators and publishers who would like their books considered for review here (and/or anywhere else he contributes) may feel free to contact him at jcalebmozzocco@gmail.com. Editors at respectable publications who would like Caleb to write for them are also welcome to contact him and offer him work. He loves money.