Dressing and keeping the garden: Creation care in Reforesting Faith and The Earth Cries Out 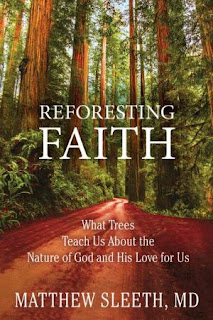 Carpenter-turned-doctor Matthew Sleeth writes in his Reforesting Faith (WaterBrook; 2019) about an instance where he had volunteered to plant trees at his conservative church, and one of the pastors told him that he had "the theology of  a tree hugger." "This was not meant as a compliment," Sleeth writes.

While the pastor was likely drawing some sort of distinction between conservative values and progressive ones as represented by concern for the environment, it certainly implied that God himself isn't a tree hugger or, as Sleeth put it, "My first reaction to the pastor's comment was, 'Maybe I'm wrong. Maybe God doesn't care about trees.'"

It would be awfully bizarre if God didn't care about trees, of course, as he did create them, right? Nevertheless, the encounter sent Sleeth to seek out his Bible—and I should perhaps here note that Sleeth and his church believe that "Scripture is the inspired, inerrant Word of God"—and start reading, cover to cover, pausing to underline everything the Bible had to say about trees. The result was this book, so obviously the Bible has a lot to say on the subject.

Reforesting Faith is essentially a brisk re-reading of the story of the Bible, from God planting the garden of Eden during Genesis' creation stories, with two important trees at their center, to Jesus' death on a cross made from a tree, pausing to note when and where trees appear, and linger on their meaning.

That Sleeth was able to produce an entire book (even a relatively short one, at under 200 pages) on the subject is evidence to how many trees there are in the story of the Bible, even if Sleeth is pretty generous in his definition of a "tree," including as he does tree-adjacent symbols like bushes, branches, walking sticks, fruit or seed; indeed, as Sleeth writes, "Every significant theological event in the Bible is marked by a tree."

What does this mean?

Well, for one thing, it means that if Sleeth was prepared all those years ago, he probably could have shut down that pastor who made the tree hugger comment pretty quickly and thoroughly. God obviously does care about trees, and the writers of the Bible—although, again, Sleeth would say the ultimate author, via divine inspiration, was God himself—constantly employed them as plot-points and symbols.

For another, it makes a pretty strong argument that Christians like Sleeth probably should be tree huggers. Forgetting for a moment the absolute ecological necessity trees are (providing oxygen and holding our atmosphere together in a livable configuration) and the many other benefits they provide humanity, of varying degrees of importance (holding soil together, breaking storms, providing food, giving shade, being aesthetically pleasing, etc), they should hold an additional, theological value for Christians.

Anyone can pause under a tree and appreciate, say, the cool of its shade, the way it sways or seems to whisper in a slight breeze, or the beauty of its intricate construction. And anyone can marvel at the unusual slow time scale that trees exist on, outliving humans by decades or centuries, and contemplate what that says about us and our place in the world.

But for Christians, they can also be a tangible, almost ever-present signal to stop and consider the two trees of Eden, the olive branch the dove brought back to Noah to let him know the flood was abating, the oak tree God's messengers first met Abraham over before initiating the covenant, the grove Abraham planted in Beersheba, the burning bush God spoke to Moses out of, and on and on, until the story Christians read in the Bible reaches its climax, and Jesus retreats to olive groves to pray fervently, and is ultimately nailed to a tree.

"God's original plan was for humanity to dress and keep trees," Sleeth concludes his book, "For those of us who claim the name of Christ, we ought to take a long, hard look at how well we are fulfilling our role as God's stewards." (Here the author is referring to the second creation story in Genesis, where in Genesis 2:15 "the Lord God took the man, and put him in the Garden of Eden to dress and keep it.").

If pastors are derisively dismissing congregants who plant trees as tree huggers, then the answer would appear to be "Not great." Hopefully Sleeth's book gets into the right hands then, and can change some minds. Christians wield an incredible amount of social and political power in the world in general and America and particular, and it's hard to think of many things that could effect greater and more rapid good for the world if that power were to be applied for planting and protecting trees. 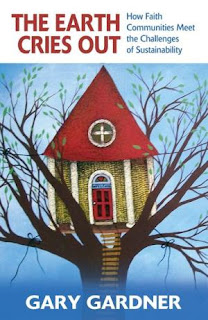 Gary Gardner notes the political power of Christian communities, much of it unused when it comes to the environmental crisis, in his example-filled, blueprint-like The Earth Cries Out (Orbis; 2021).

"People of faith bring a set of infrastructural, social, financial, political, and, of course, moral and spiritual, tools to the sustainability challenges of our time," he writes, before listing the many virtues of faith communities, from meeting regularly and being highly motivated to bearing moral authority to controlling "meaningful amounts of investment capital" .and managing land and buildings "that are potential sustainability showcases."

"Few institutions at the global level have such a broad and powerful tool set," he writes, "Of course, these asserts are seldom utilized to their fullest potential; people of faith are arguably punching well below their weight on the critical issues of our day."

To extend the metaphor, The Earth Cries Out offers coaching on how throw better, more effective punches.

Gardner begins his discussion with "signs of the times," a phrase that was "Jesus' terms for societal markings of moral importance." These involve the facts that, if you're reading this blog,  you're likely already well aware of, like the rapidly warming planet caused by runaway carbon dioxide emissions and the sixth extinction ("This unraveling of the fabric of life is nothing less than the decimation of billons of years of God's creative work," as Gardner memorably refers to it).

So what can faith communities do about the state of the earth, which is in its threatened state in large part because, as Gardner puts it, humanity has corrupted the dominion we were given over God's creation into our domination of it...?

The chapters that follow discuss various sustainability challenges—energy, land, food—as well as work being done by some faith groups to address them, and often times quite specific examples of efforts, efforts that an engaged and committed church or faith community can replicate.

Many of these actions may be familiar to many readers, including smart divestment (particularly of fossil fuel industry) and reinvestment, solar panel installation, creating community gardens and green spaces (the latter of which can serve dual, environmental as well as spiritual functions), patronizing particularly sustainable and just business models, and so on.

These may be practices that individuals are already committed to in their personal lives, but Gardner discusses them on the scaled-up level of a parish, congregation or other faith community, where the impact is several orders of magnitude greater than that  personal level.

Though grounded in the author's Catholic faith, the book is filled with examples that aren't limited to a single denomination, or even a single religion, but strives to be inclusive of people of faith in general. Given the enormity of the crises facing us at this point in history, faith is probably going to be a pretty important component in what is needed to fix the megaproblems before us, regardless of the intricacies of how one worships (or if one worships at all).

If one does so, though, then The Earth Cries Out offers plenty of strategies to bring to one's fellow faithful.

Caleb
J. Caleb Mozzocco is a freelance writer who lives and works in Ohio. Creators and publishers who would like their books considered for review here (and/or anywhere else he contributes) may feel free to contact him at jcalebmozzocco@gmail.com. Editors at respectable publications who would like Caleb to write for them are also welcome to contact him and offer him work. He loves money.